Origins of the Claddagh

The Claddagh has become a symbol that is recognised all around the world, but where did it begin? The most plausible legend of the Claddagh ring can be traced to a Galway man named Richard Joyce in the 1600’s. According to this legend, not long before he was due to marry, Richard was captured by pirates at sea and then sold into slavery in Algeria. He was sold to a rich Moorish goldsmith, who taught him the ancient craft. Richard became fully proficient in goldsmithing and in his time there crafted the first ever Claddagh ring, a ring comprising of a heart, hands and a crown. According to the legend, Joyce became a free man in 1689. He returned to Galway and found the love of his life patiently awaiting his return. He presented her with the original Claddagh ring which he had crafted, and they married. The Claddagh design continued to gain popularity since then, and now Claddagh jewellery is often passed from generation to generation.

Meaning of the Claddagh

The Claddagh is a traditional Irish ring that can be worn to symbolise Irish heritage or to acknowledge the symbolism of the design, Love, Loyalty and Friendship. The heart symbolises love, the hands symbolise friendship, and the crown represents loyalty and fidelity.

The Claddagh symbol has evolved with time, now countless variations of the Claddagh design exist for all genders. The Claddagh can be sterling silver or gold. The Claddagh symbol has also been adapted for use on pendants, necklaces, and bracelets and you can see some examples of this here. They are often exchanged as a gift of sentiment, a symbol of Irishness but continue to represent love, loyalty and friendship. Claddagh rings have a unique meaning to each wearer, it can be worn as a wedding band, as a symbol of Irishness or Irish heritage, as a treasured gift from a dear friend or could be passed down through the generations of a family. The Claddagh can often be found with a heart shaped stone set in the middle and this stone can often be a birthstone making them an excellent birthday gift. Of course many people choose to just wear their favourite colour, rather than their own birthstone. No matter what your interpretation of the Claddagh ring is, it is clear that it has become a symbol that can be enjoyed by everyone.

Speaking of modern twists… Check out our stunning Rainbow Claddagh rings here. These are available in a wide variety of sizes in store at Trim Jewellers or on trimjewellers.ie. 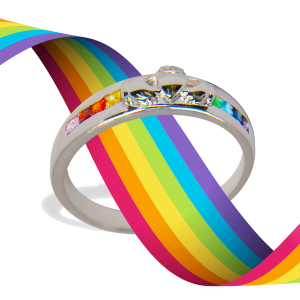 How to wear a Claddagh ring

Long before relationship statuses were found on Facebook or Instagram, the Claddagh was used as a symbol for what your status was.

Realistically, in modern times, a lot of these rules have gone out the window. People wear Claddagh rings how and where they want to. The Claddagh’s personal meaning is known only by the wearer and if it was a gift maybe the gift-bearer might know too. Claddaghs are to be enjoyed by everyone so create your own story! 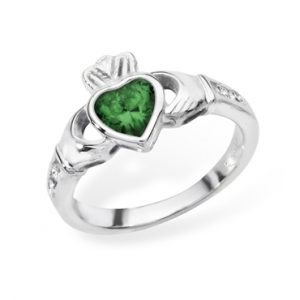